How big is E-Commerce?

According to the latest release by the United States Census Bureau, retail e-commerce accounted for $264 billion of sales in 2013. So, in a vacuum it would appear that with a number that large, internet-based sales are dominating the retail landscape with brick and mortar stores fading away. However, that is not the case at all. The total retail trade market topped $4.5 trillion in 2013 leaving e-commerce with 5.8 percent of all retail sales. In fact, the largest brick and mortar retailer, Wal-Mart, is bigger than the entire e-commerce retail market. To be sure, this market share is rising as the graph below shows. E-commerce's share of retail sales had been rising 0.4 percentage points per year from 2008, when it was 3.6 percent of total retail sales, to 2012 before increasing 0.6 percent of market share in 2013. 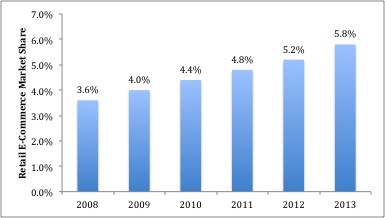 One interesting aspect of e-commerce sales comes when looking further into the breakdown of sales by retail category. (A major shortfall of the way the Census Bureau reports e-commerce data is that it is categorized by the business that sells the product rather than the product itself. For example, this method of categorization does not provide the percentage of books sold via e-commerce.) In 2012,the latest year in which category breakdowns are currently available, 85 percent of all e-commerce sales come from establishments categorized as "Electronic shopping and mail order houses" which basically means retailers with no physical storefront such as Amazon. That leaves only $35 billion, or less than 1 percent of sales, from stores with a physical presence that took place online. Motor vehicles and parts dealers derived the greatest percentage of sales among physical retailers, followed by the sporting goods, hobby, book, and music store megacategory. Those were the only two categories of physical retailers that attribute more than 2 percent of the sales to e-commerce.

Another interesting statistic is that just over 40 percent of sales at business that categorize themselves as "electronic shopping and mail order houses" are not e-commerce related. This means that people are still calling or sending physical order slips in to place orders.This in down from 50 percent in 2008 but it still represents over $130 billion in sales.

So, as much as it seems that e-commerce has taken over the retail landscape it still only accounts for $1 of every $16 spent in retail outlets.For more information you can look at the Census Bureau's page on e-commerce statistics here.

In the next posts I will dig deeper into specific product categories of e-commerce to see how they have changed within the retail landscape.