A Look Back At The 2012 ABA Indie Impact Study Series

When analyzing the economic benefits of shopping at independent businesses it always comes back to the amount of money they keep in the local community after the initial purchase is made. After calculating how large this advantage can be in our Austin and Andersonville studies we realized that this trend would likely hold up nationwide. However, until partnering with the American Booksellers Association and conducting the survey around the country we did not have any proof. Now, we are armed with information from various cities from around the United States, both large and small, and are even more confident that independent businesses recirculate more money locally than national chains.

The ABA Indie Impact Study Series included 133 business surveys in ten separate communities that were used to identify exactly where the money spent at independent business wind up after the initial consumer transaction. The five main economic advantages independent businesses have over chains are:

1. Greater employment per dollar of revenue.
2. Local ownership keeps profits in community.
3. Use of local business support services.
4. Greater likelihood to use locally made products.
5. Greater share of revenue used for charitable giving.

As the charts below show, the advantage that independent retailers have over national chains is a 48% vs. 14% recirculation rate. Independent restaurants hold a 65% to 30% edge. This additional money in the local economy leads to more employment, wages, and additional sales occurring in the community. 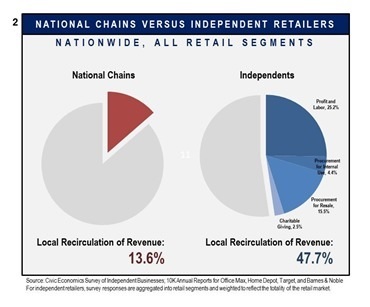 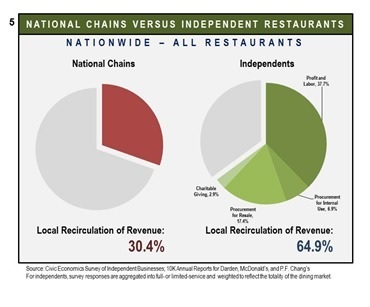 We are in the process of conducting another round of these studies to be released at the end of 2014. This study allows communities to show their community, business members, local officials, and media that independent businesses are having an important impact in their respective city without relying on results from national studies. The results are specific to your community and can be an important tool in showing the economic advantages of shopping at independent businesses. Information about the process can be found here.