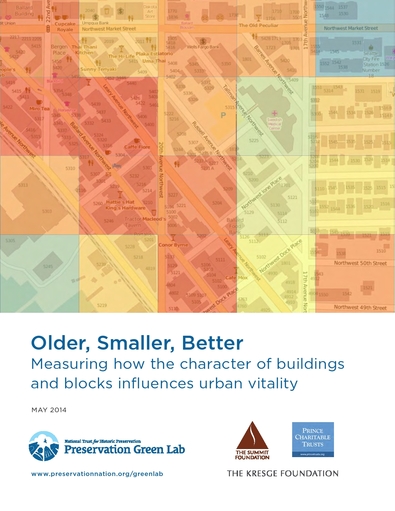 They developed a methodology that involved breaking a city down into a series of 200-meter-by-200 meter squares and analyzing each based on a series of indicators of economic vitality. Data sources included city, county, state, federal, and publicly available private data that were all tied together to create a composite "character score" to allow the measurement to occur.

Among the various conclusions are that the oldest, most diverse & finest-grained buildings produced "more jobs per commercial square foot" and "significantly more non-chain businesses" than the newest, largest, and least age-diverse buildings. This is a topic that we have been addressing since our Andersonville study showed local businesses have more sales per square foot than national chains. We expanded upon it for our Thinking Outside the Box study in New Orleans as well by demonstrating how much larger the economic impact of many, smaller independent businesses can be when compared to large-scale national retailers.

It is great to see those smaller projects validated by this large, complex endeavor taken on by the National Trust for Historic Preservation. Although the data is specific to the three cities listed above, there are many concepts that can be applied to cities around the country.